How to Score a Cheap Galapagos Cruise

Updated March 2021, How to Score a Cheap Galapagos Cruise was originally written in May 2017

The Galapagos Islands are notoriously known for being a must-visit destination. It’s a sought-after, remote, well-known, and world-renowned destination. Its popularity means that a lot of trips and cruises are fully booked well in advance so it can be hard to plan a last-minute trip there. But did you know you can take a Galapagos cruise for much much less than the advertised prices you see online?

The following tips are going to give you advice on how to get a last-minute Galapagos Cruise.

Remember, that if you pre-book a cruise online you will most likely pay exponentially more money for it, however, you get that comfortable feeling that things are squared away and all you gotta do is show up. But remember convenience comes with a price tag. For example, one couple we met on our catamaran that did so because they had very limited time paid double what we did to be on our catamaran for only 4 days (we were on it for 8)!

If you’re just starting to plan your trip to the Galapagos, I recommend picking up a copy of Bradt’s Ecuador & Galapagos.

So, to cut the fat and get to the goods, here it is:

How to Take a Cheap Galapagos Cruise

These four simple tips will help you get the best price on your Galapagos cruise.

US dollars are the official currency in Ecuador. Bring the maximum dollar amount you’d be willing to pay when you’re going from agency to agency. You can book last-minute cheap Galapagos cruises after you arrive in the islands, as well as at agencies in Quito or from Guayaquil.

Personally, we ended up booking a super last-minute deal in Puerto Ayora. We flew into Baltra, took the bus and ferry across to the island of Santa Cruz, were dropped off in Puerto Ayora, got a room for the night, met a fun couple staying there, and headed out to the Charles Darwin Station with them for the afternoon, then came back to our hotel, changed clothes and headed out to score our cheap Galapagos Cruise.

30 minutes, 1 agency, and $1,200 each ($2,400 total) later, we were set up to leave the very next morning on an 8-day, tourist-superior class, all-inclusive, cruise of the Galapagos Islands with a private cabin on a 16 passenger catamaran, the S/C Solitario Jorge in June of 2016- yep friends, that’s the high season! That comes out to $150 a day each for all accommodations, meals, and activities.

Wanting to take a 5-day cruise but only booked roundtrip tickets that will put you on the islands for 5 days and it’s the high season? Well, that’s was your first mistake. You need wiggle room if you want to get a cheap Galapagos Cruise. If you turn up at a booking agent with rigid timeframes these guys will sniff it out.

We went into the agent we purchased from and asked which cruises were leaving in the near future and what their lengths and stops were.

3. Don’t be scared to haggle

If you’ve been traveling Ecuador or South America prior to your Galapagos arrival you likely know this song and dance is just a way of life here. What’s the worst? The agent says no and won’t budge.

There’s a plethora of agencies around Puerto Ayora (or Quito and Guayaquil if you’re still on the mainland), so you can always pick up and move along to the next one. Knowledge of the Spanish language here is beneficial.

The agent I booked with only knew a few words of English, but I knew enough Spanish to communicate my needs and to barter a price with him.

4. Know what you want

Are you willing to go on a more economical-style catamaran trip? Or are you expecting luxury?

Willing to share a cabin with a stranger/strangers? How many days? Which islands and locations do you want to visit?

These preferences will, of course, make a big difference in what kind of price you’ll pay. Personally, I’m not fussed about much, so we opted for a catamaran that could only take up to 16 passengers (a small group is more my style anyway).

We didn’t even ask if we would be sharing a cabin with anyone else because quite frankly, we didn’t come to the Galapagos to sleep in solitude- we came for the wildlife and the unusual landscapes. We did end up with our own cabin that had a private toilet/shower and air conditioning.

I knew I wanted a minimum week-long Cruise. So when we found an 8-day catamaran to the eastern islands I was sold.

Bonus Tip #1: Visit in the offseason

June to September and Christmas/New Year (late December and early January) are the peak seasons. The benefit is that there are tons of ships, yachts, and catamarans leaving daily, but prices tend to be a little higher.

June to September is officially the dry and cool season and the best time for wildlife viewing. December to June is the wet season so more showers and warmer temperatures can be expected, but this is when the landscapes are most lush.

My best friend’s parents spent 3 weeks in the Galapagos in February 2016 and scored an amazingly cheap deal on a last-minute cruise seeing that it’s the rainy offseason and that they had tons of time to play with.

Yup, bring your own booze! (or soft drinks if you enjoy them). On our catamaran, a beer or glass of wine would set you back $3 apiece and an 8oz bottle Coke, Fanta, or Sprite $1.50 each, which isn’t astronomical, but it adds up if you’re a drinker.

Bonus Tip #3: Ask to see your vessel before you pay

There are passenger accounts online for being booked onto a problematic yacht, catamaran, or ship. Anywhere from rooms that smell so awful you can’t be in it without gagging to downright dangerous damages to the vessel.

Don’t forget to tip the crew!

These guys bust their asses to make sure you have a great trip. It’s not required but it is very much appreciated.

We actually are still good friends with our naturalist guide Andreas (he’s seriously one of the BEST guides I’ve had the world over) he even came to Alaska a few months later and stayed at our house (of course I missed him because I was off traveling again).

What to be wary of

Is the price too good to be true? It likely is.

When shopping around expect 5 day cruise deals to come in around the $750 to $1,800 range depending on the cruise class. If prices are extremely low it can be a bad sign.

It could include an unqualified guide, poor equipment, or an unreliable ship (yes, the occasional shipwreck does and can happen out here). It’s a good idea when booking to ask to see the yacht, ship, or catamaran before you agree to book.

Know what’s included. Typically most cruises will include meals, tours, and snorkel gear. Scuba trips and alcohol are usually an additional fee. Know before you pay.

My cruise included meals, snorkel gear, and all tours. Scuba gear was onboard but did cost extra if anyone wanted to go diving, wet suits were onboard and available for an extra fee for the duration of the trip, and alcohol/soda was extra.

But what about being land-based and doing day tours?

If you’re on a budget and cruise prices even at last minute are too high for what you’re working with being land-based is an option.

After quizzing my best friend’s parents, as well as numerous people I know back home who have gone to the Galapagos and did both cruises and land-based activities the consensus was: it’s a once-in-a-lifetime trip for most people, SPLURGE ON A CRUISE!

My best friend’s parents spent 21 days in the Galapagos, 12 were onboard a ship, the remaining was spent doing day trips around the islands. While they said they enjoyed the day trips they did, they felt the cruise was a much more valuable experience as being land-based and day-tripping out can really limit your options as to where you can realistically visit.

Another thing to remember that if you do decide to ultimately stay land-based that you will be paying for your accommodation, meals, and tours. Tours can range from $50-$200 per day, (most hover around $100 pp/per day), accommodation can range from free if Couchsurfing to $25 per night for a private room and up to the hundreds of dollars per night range, and of course meals will range depending on your preferences. This can rack up to the same cost or more per day than a last-minute cruise would cost you if you’re not careful with your expenditures.

Some savvy travelers report doing all this on less than $50 per day per person. Which for two people comes out to less than the cost of one person per day on the catamaran I went on.

A great comparison to read is Flora the Explorer’s trips to the Galapagos on both land-based and cruise trips. She really highlights the pros/cons of each.

It is possible to fly to/or out of either Baltra or San Cristobal and take ferries between the main islands of Santa Cruz, San Cristobal, Floreana, and Isabela and create sort of a DIY super cheap Galapagos cruise. You can do day tours from each location to get a mixture of different areas and islands.

Each of those four islands offers free hiking, areas you can snorkel independently and of course, wildlife hasn’t cashed in on charging fees to view them, however, visiting other islands beyond those four listed you usually need permissions from the national park and be accompanied by a guide.

Wanna check out ferry schedules and costs? Read this post.

Where to stay on Santa Cruz

Where to stay on San Cristobal

Where to stay on Isabela

How I feel about the cheap Galapagos cruise I took?

We were both very happy with our catamaran trip of the Galapagos. I feel we saw all the wildlife and all the landscapes we had come to see.  I actually do not feel a need to ever go back to the Galapagos and for good reason: because we saw so much.

I don’t feel we missed anything at all. Of course, we didn’t get to experience the western islands of the Galapagos because the cruises were on their three-week trips to the east (The national park allows boats in the east for 3 weeks, and then the west for 3 weeks to give wildlife breaks from the boats).

I was thoroughly happy with what I experienced on the eastern islands. We had an amazing guide who was knowledgeable on anything Galapagos (he was born and grew up on Santa Cruz).

I was also impressed with how well regulated the park is and what is being done to conserve the environment and protect it from the impacts of tourism.

Have any questions about cheap Galapagos cruises?

Ask your Galapagos cruise and Galapagos budget questions in the comments section below! 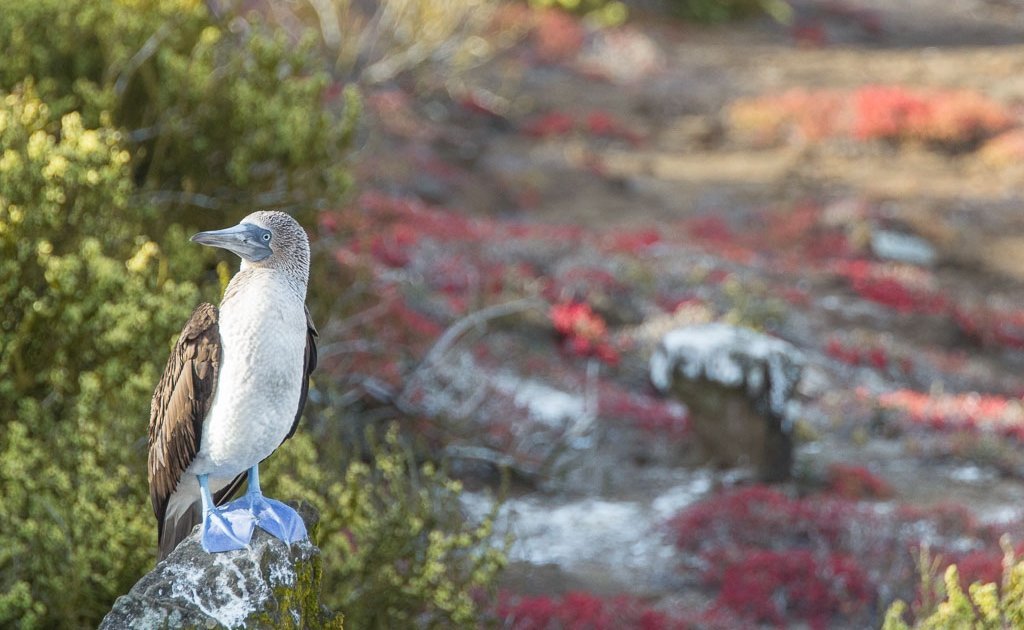 How to Score a Cheap Galapagos Cruise

1 thought on “How to Score a Cheap Galapagos Cruise”