Darvaza Gas Crater: Camping at the Door to Hell, Turkmenistan

Updated June 2021, The Darvaza Gas Crater: Camping at the Door to Hell, Turkmenistan was originally written in January 2020

Two things brought me to Central Asia initially: The Fann Mountains and the Darvaza Gas Crater.

A big thing separates the two: Uzbekistan. So that quickly got tacked on, and I mean since we’re over there right? I may as well add Kyrgyzstan and Kazakhstan to the list too.

That’s how my first trip through Central Asia came to be: The geographical separation of some glacial carved mountains and a flaming pit of despair dictated the itinerary. I’ve always been fascinated with oddities, so much like my burning desire to see a church completely decorated in human bones in Kutna Hora on my first overseas trip largely dictated those first trip plans, so did a fiery crater in the ground in Turkmenistan.

So What Is The Door To Hell?

Picture it, it’s 1971, the Karakum Desert, Turkmenistan. Nothing much of anything was going on around here until Soviet scientists had a hunch there might be oil trapped beneath the Earth here.

Soon, engineers and drilling rigs were summoned to the Darvaza area to explore the Karakum Desert in search of the black gold, but on a fateful day, the survey of Darvaza found a natural gas pocket. A drilling rig was brought over to begin drilling and the ground beneath buckled, opening up a crater, swallowing the rig.

The engineers went scrambling, fearing that the gaseous pit would poison the nearby residents. The only viable solution? Light the gas crater on fire. It’ll burn out in a few weeks, won’t it?

So that was how the Darvaza Gas Crater was born, and being a flaming hole in the ground naturally gained it the nickname ‘the door to hell’.

Note that denials of Turkmen visas are quite common, so I recommend applying as early as possible (though the earliest you can apply is 3 months prior to entry).

Getting a Turkmenistan Tourist Visa is going to be the easier of the two, though with the requirement of booking a mandatory tour makes this the most expensive option. Your tour operator will guide you through this process and provide all the necessary documents.

Typically your tour operator will issue a letter of invitation to you and then you’ll be sent a code. Print this code and the LOI and have them with you for your arrival at the border or at the airport.

Your actual visa will be placed in your passport on arrival. Most tourist visas are issued for 7-21 days in length.

Getting a Turkmenistan Transit Visa is a bit more difficult and a higher likelihood of arbitrary denial. Transit visas are usually issued for 3-7 days in length, with 5 days being very common and 7 days extremely rare.

What You Need To Apply For A Turkmenistan Transit Visa

How To Get To Darvaza Gas Crater

If you’re just beginning your research on visiting the Door to Hell after seeing some images online, know that traveling to Turkmenistan is not exactly a walk in the park. Turkmenistan is nothing short of… unique. Shrouded in mystery and long led by a peculiar dictator the country remains a big question mark for many and with a pain-in-the-arse of a visa process, many travelers forgo it altogether.

There are two ways you can reach the Darvaza Gas Crater, on an organized tour, or by using public transport.

Starting or ending your Turkmenistan trip from Ashgabat? Check out my City Guide to Ashgabat

On A Pre-Booked Tour

This is obviously the most expensive option, but you pay for convenience. For those planning to visit Turkmenistan on a tour, plan for about $150 USD per day for your budget.

Many tours make a loop if you will combining several destinations within Turkmenistan and Uzbekistan, while other tours will start and end in Ashgabat, including a night at the Door to Hell.

Buses leave the Ashgabat International Bus terminal at 7 am and 8 am passing by Darvaza en route to Dashoguz and Konye Urgench. Expect to pay 20-50 Turkman Manat (TMT) for the ride on a bus (bus to Konye Urgench is the more expensive of the two. Shared taxis will charge a bit more.

If you’re coming from the Uzbek border nearer to Bukhara you’ll likely wind up taking a shared taxi from Dashoguz in the Turkmen side of the border to Darvaza.

Konye Urgech is the first town on the Turkmen side of the border near Nukus, Uzbekistan. From Konye Urgench you will find shared taxis departing for Dashoguz and beyond. A taxi from Konye Urgench to Ashgabat will cost about 45 TMT.

From Darvaza to The Gates to Hell

Once you’ve reached Darvaza you can arrange the remainder of your transport to and from the Darvaza Gas Crater. Cars can be found near the Ichoguz train station. Expect to pay about 175 TMT for a ride there and back, but you’ll likely need to haggle.

For those traveling by motorbike or their own cars, the trails to the Darvaza Gas Crater are marked on maps.me.

It’s possible to walk to the Door to Hell but note that you’ll likely need at least 2 hours to each way.

It can be extremely hot in the summer and downright frigid in winter, spring, and late fall. Make sure to pack in enough food and water as there are no restaurants at the Door to Hell.

Where To Sleep At The Darvaza Gas Crater

If you have your own camping gear you can set up your tent wherever you want, but it’s advised that you camp a decent distance from the Door to Hell as the fumes will make you ill. There are also a couple of yurtstays on offer nearby.

Otherwise, make arrangements to sleep back in the town of Darvaza (I’ve read of people sleeping at chaikhanas along the main highway). If you are on a tour, tents will be provided.

What Was It Like To Camp At The Door To Hell?

But really, it was one of the cooler camping experiences I’ve ever had seeing the Door to Hell glowing in the distance from my tent. Unfortunately, I didn’t arrive early enough at the Door to Hell to see it at sunset and get pretty photos of it in the light, but nothing beats standing on the edge of a burning crater in the freezing cold Karakum Desert.

I visited on October 30-31 and I’m not kidding, it was freezing cold (I mean, standing on the edge of the crater was warm, but you won’t sleep here). If you’re planning to camp here make sure to bring plenty of warm layers.

My only regret? I should’ve brought a bag of marshmallows to cook. Okay and maybe that I didn’t take a single photo of camp, but also I’m kind of a half-assed blogger…. okay and let’s also mention that I tripped over a pipe on the ground near the crater and broke one of my camera lenses- So be careful of the pipes!

*I guess there is now a fence around the crater from newer videos I’ve seen, however it doesn’t appear to be that high.

Getting Away From The Door to Hell

To get out of Darvaza you can try to take a bus or shared taxi headed in the direction of Ashgabat, Dashoguz or Konye Urgench, but sometimes it can be a challenge to find one with an empty seat, so be prepared to wait. Otherwise, you can try to hitchhike as well.

Check out this Ashgabat-Darvaza-Ashgabat tour to the Darvaza Gas Crater on Viator. If you’re looking to book a longer tour of Turkmenistan, check out Odwan Tourism.

Have Any Questions About The Darvaza Gas Crater? 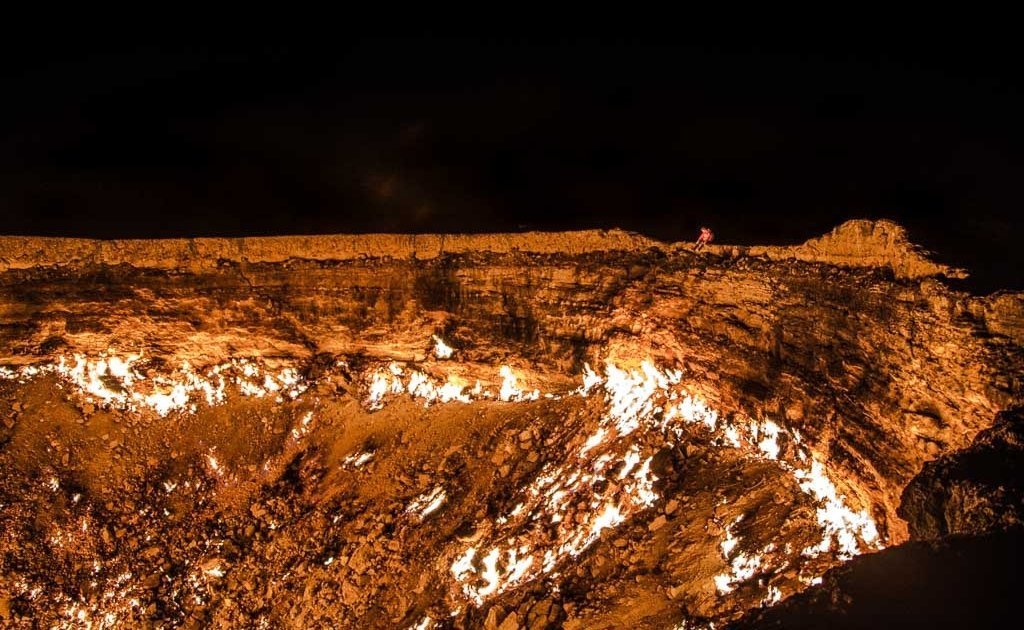 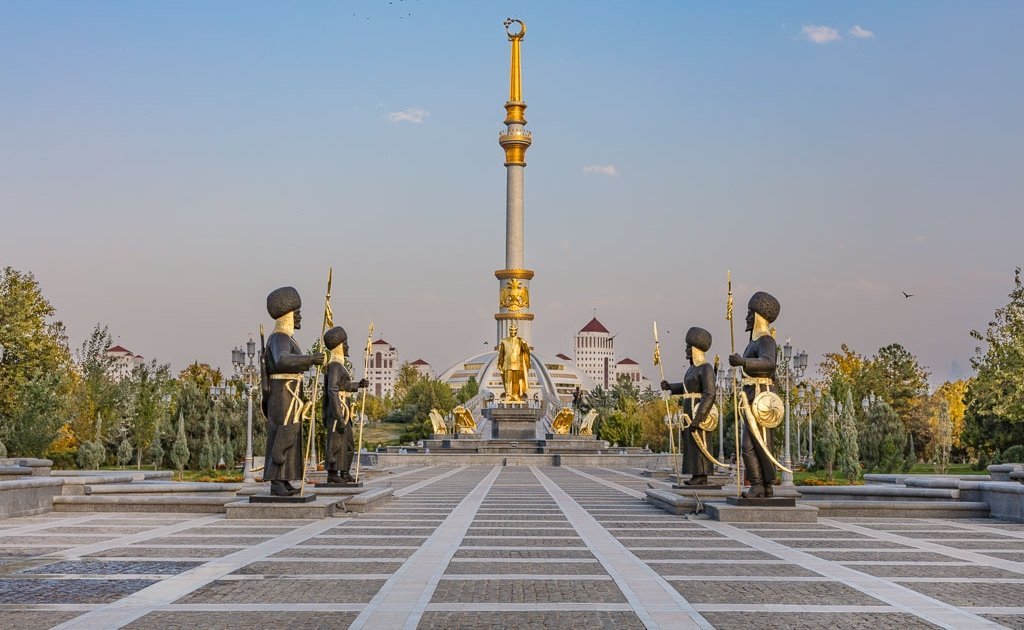 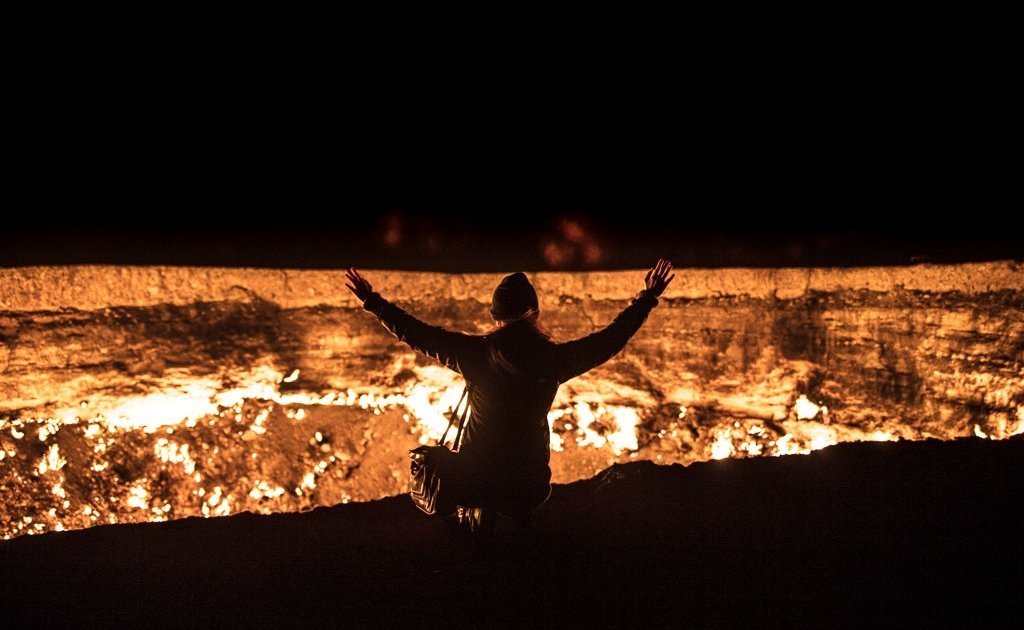