Why You Need To Visit The Dahshur Pyramids In Egypt

Updated April 2020, Why You Need To Visit The Dahshur Pyramids In Egypt was originally written in March 2020

Maps and funny names have led to some of my favorite discoveries on the road. And don’t take the use of the term ‘discoveries’ too seriously- I really don’t view myself as a modern-day female Ibn Battuta or Marco Polo.

With that said, on my final day in Cairo earlier this month I was going on a (what I like to call) maps.me journey, trying to decide what to do that day. That’s when I stumbled across the Red Pyramid and Bent Pyramid labeled on the map. Interest piqued.

With little to no knowledge of the Pyramids of Dahshur, I ordered an Uber to the Red Pyramid. My Uber driver knew right away that there was little to no hope of me being retrieved out there- so he offered to be my guide for the day. Perfect.

About 45 minutes later I found myself trekking across the empty Sahara to Red Pyramid with Bent and Black Pyramids in the distance with the backdrop of Cairo looming far in the distance.

Great success– I’d found uncrowded, tout-free, minimal baksheesh required, massive pyramids a short jaunt out of Cairo. And not to take away from the Pyramids of Giza- you should visit them in all their grandeur too… but if you want a break from the tourist frenzy, Dahshur is an excellent option.

What Are The Pyramids Of Dahshur?

Dahshur is a town just south of Giza located on the West Bank of the Nile. But a quick drive through the narrow streets will spit you out into the desert with Red Pyramid towering on the horizon.

The Dahshur Pyramids predate the more famous Pyramids of Giza, constructed between 2613-2589 BC, and are to be among the best-preserved, largest, and oldest of Egypt’s pyramids, despite having been closed to the public from 1965 until mid-2019.

The Pyramids of Dahshur are credited as being the transition of Egyptian pyramid building technology as construction shifted from step pyramids such as Saqqara to the smooth-sided pyramid design seen on Giza’s Khufu and Khafre.

Dahshur consists of five pyramids with only three not in total ruin: Red, Bent, and Black.

Bent Pyramid was the first of the Dahshur Pyramids constructed around 2600 BC under the reign of Sneferu, the pharaoh of the Fourth Dynasty of Egypt, though it was Sneferu’s second pyramid (the first was Meidum Pyramid, which partially collapsed in ancient times). Bent Pyramid has an odd shape to it for an Egyptian pyramid, displaying its place firmly in early pyramid development.

The base of Bent Pyramid rises from the earth at a steep 54 angulation. Egyptologists believe that due to the steepness of the original angle, the structure may have begun to show signs of instability and possibility of collapse.

It’s believed that builders then continued construction but reduced the angle to 43º, giving the pyramid its ‘bent’ appearance, hence its name. Another theory suggested is that Sneferu’s death was nearing and that the angle was reduced in order to complete the construction earlier.

It’s now possible to enter Bent Pyramid and explore its chambers. From the north side of Bent Pyramid, you can enter via a long and narrow tunnel and then climb a staircase and later up another tunnel to access a chamber within Bent Pyramid.

Plan your stay in Cairo with my Cairo travel guide

Two tourists were resting outside the entrance when I entered into Bent Pyramid, but once inside I was completely alone, or so I thought until I reached the top when I noticed the faintest chirp of bats. There are small bats hanging all over from the top of the chamber.

If you’re at all claustrophobic, unfit, or sensitive to heat I wouldn’t recommend going inside as the tunnels are quite narrow and even in the cool temperatures of February it was boiling hot inside.

From the north face of the Queen’s Pyramid, there is an entrance to the corridor within (it’s much shorter than the effort it takes to reach the chambers in Red and Bent Pyramids). Egyptologists believe that the pyramid was more likely used for ritual purposes (and not for the queen) because the chamber within is too small for human burial.

On the east face of the Queen’s Pyramid, there is a small shrine to Sneferu.

The Red Pyramid (also known as North Pyramid) is the largest of the three main pyramids of Dahshur and was the third pyramid built under the orders of Sneferu, and the second pyramid built as part of the Dahshur Necropolis.

It’s believed that the construction of the Red Pyramid began in 2590 BC and took approximately 10-17 years to complete based on Egyptologists’ estimates.

But Red Pyramid wasn’t always red- so the name was clearly given in later times. It was originally white, which can be seen on the bases and corners where some of the white Tura limestone remains.

The white limestone outer layer was actually stripped from the pyramid to be used for constructions in Cairo, which exposed the red limestone layer below, and hence why the pyramid is referred to as the Red Pyramid now.

As with Bent Pyramid, the Red Pyramid was closed until very recently. From the north face of Red Pyramid, it’s possible to enter the pyramid’s chamber via a narrow tunnel.

Black Pyramid (also called the Pyramid of Ahmenemhat III) was built under the orders of King Ahmenemhat III, the pharaoh of the 12th Dynasty of Egypt from 1860 to 1814 BC.

This was Ahmenemhat III’s first pyramid and sits largely in ruin due to Ahmenemhat III who didn’t heed to the failings of other pyramids that came before it.

Shortly after construction Black Pyramid had already begun to fail. The Black Pyramid was built upon unstable ground too close to the edge of the Nile River resulting in eventual flooding. The pyramid was made of mudbrick instead of stone, rendering its structure weak compared to other constructions.

A complete lack of stress-relieving mechanisms in the ceilings of the corridors and chambers, and too many chambers to boot at that- all helped to contribute to the failings of the Ahmenemhat III’s Black Pyramid. At completion, the ceilings had all on average dropped by about 2 inches, and eventually, the pyramid sunk and cracked.

Cedar planks and mudbrick structure reinforcements were used to help prevent the further demise of the Balck Pyramid. At that point, Ahmenemhat III  abandoned the project and had his second pyramid built in Hawara.

The pyramid gained its more commonly used nickname- Black pyramid due to its dark mudbrick core being exposed.

How To Get To The Dahshur Pyramids

The Dahshur Necropolis is located south of Cairo and Giza. You can expect travel time from either to take about 45 minutes to 1 hour each direction.

The easiest way to reach the Dahshur Pyramids is by ordering an Uber roundtrip as not many cars are hanging out in the Dahshur area so it could very likely be a very long wait if you order one only one way.

An Uber to the Dahshur Pyramids from Tahrir Square (Downtown Cairo) will run about 190-200 EGP in each direction and from Giza to Dahshur about 140-150 EGP each way. Of course, you can always negotiate a trip with a taxi driver, but make sure that you agree to a price (distance + waiting time) beforehand.

If you want to make a full day of it, I would highly recommend visiting both Saqqara and Dahshur on a day trip from Cairo or Giza, as Saqqara is located only 10 kilometers north of Dahshur. Saqqara was the burial ground and necropolis of ancient Memphis and is home to the famous Step Pyramid of Djoser- the oldest pyramid in the world constructed between 2630–2610 BC.

Plan for a good couple of hours (at least!) to explore the Pyramids of Dahshur, not including travel time. I spent about 4 hours walking around the pyramids and visiting their chambers.

There was one man who had keys to the entrances to the pyramids- all were open except the Queen’s Pyramid (part of Bent Pyramid), and he took me over and opened it up for me (I’d have never known otherwise that it was possible to go inside it).

After you’ve driven through and out of the town of Dahshur, you’ll reach a checkpoint where you’ll need to pay the entrance fee to the Dahshur Necropolis. The fee is 60 EGP per person for foreigners.

Tours To The Dahshur Pyramids

I know not everyone is like me and prefers to have all the logistics sorted out for them. There are a number of tours available on Viator ranging from half-day group tours to Dahshur, private tours, combination tours including Memphis and/or Saqqara, and multi-day tours including Saqqara, Memphis, and Giza.

Cairo has the widest range of accommodation options with my favorites being the Steigenberger El Tahrir Square (the buffet breakfast is seriously one of my favorite things in life) and the crazy inexpensive Holy Sheet Hostel.

Giza, in my opinion, is much cheaper than staying in Downtown Cairo for the quality you get. Without a doubt, I recommend the Panorama Pyramids Inn for those opting to stay in Giza- not only is the breakfast huge and delicious, but they also serve up lunch, dinner, tea, coffee, and shisha for no extra charge. Oh, and the views from the rooms and from the terrace up top are to die for. You can also enjoy the Giza Pyramid Lightshow from the rooftop or from your room too.

Have Any Questions About Visiting The Dahshur Pyramids? 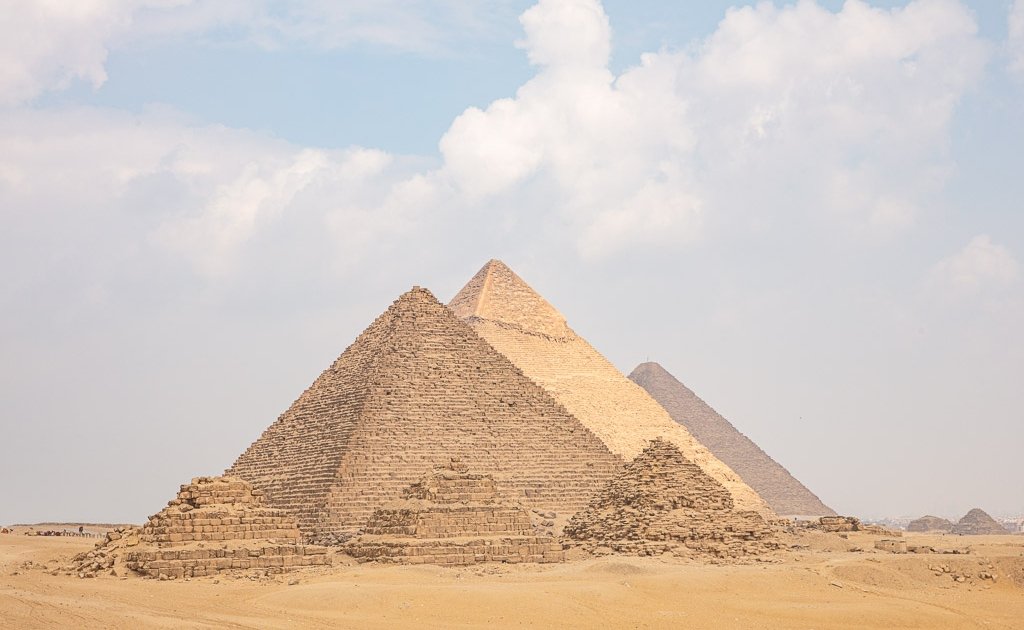 Cairo Travel Guide + 12 Things To Do In Cairo 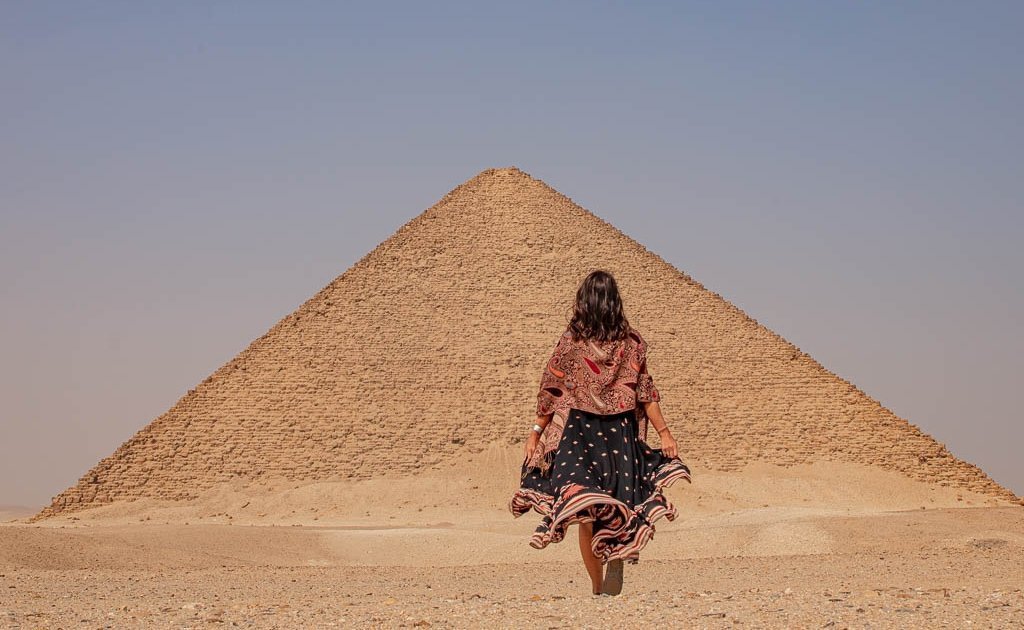 Why You Need To Visit The Dahshur Pyramids In Egypt