A few years back, I arrived at Chobe National Park about halfway through a wild adventure that took me from Cape Town to Zanzibar. After a few nights of bush camping, walking safaris, and island hopping in the Okavango Delta, it was time to move to Chobe National Park.

Chope National Park is famed for having a diverse and large concentration of wildlife, in fact, the most diverse in all of Botswana. It was the nation’s first national park.

If you want to skip straight to the Chobe National Park Travel Guide, click here

We first made the journey up from Maun after finishing a three day trip in the Okavango Delta, passing through the town of Kasane before entering Chobe National Park in the late afternoon. Starting from the Serondela in the northeast of the park we made our way into the park.

The Chobe River is part of the larger Cuando-Linyanti-Chobe river system that eventually pours into the famous Zambezi River.

The first item on the agenda after arriving at the national park was a Chobe River cruise among hippopotamus. I had seen heaps of hippos as I made my way across the Caprivi Strip and from island to island in the Okavango Delta, but the sheer number of them I saw in Chobe was impressive.

As we continued, the river widened and the array of wildlife became much more diverse. Elephants headed down to the water’s edge for a drink of river water, African buffalo and crocodiles right on the shores, storks and fish eagles lazily watching us float on by.

The Chobe River cruise wrapped by the late afternoon, giving us time to head out on a safari, on land.

Heading to Zambia next? Plan a visit to South Luangwa National Park

With the river safari out of the way, it was time to explore on land. Not that I didn’t like the Chobi River Safari- I really did, I just enjoyed the Chobe National Park Safari, on land, better.

From the safari trucks at the park entrance gate, we made way into the Serondela area of Chobe, first following a set of dirt tracks up onto a hill covered in scrubby plants with rust-orange sand beneath and views of Chobe River in the distance. We descended down closer to the river to be met by encounters with storks and grazing impalas.

A little further down the river, we could see lions in the distance. They looked young and seemed to be playing around with something. Upon further inspection, it was actually a monitor lizard that the youngsters were batting around. The cubs quickly lost interest after we got close enough to get a good look at the massive monitor lizard.

Continuing on, we found ourselves back at the shores of the Chobe River, this time with the elephants the park is known for, stealing the show. One in particular stopped and seemingly posed about 20 different ways for us.

Nearby we spotted an African Fish Eagle and a Sable Antelope along the Chobe River, the eagle seeming to pause to catch its own reflection in the glassy waters of a run-off pool next to the river.

Soon after, a parade of elephants again took all the focus away from the other game. This time a much larger group than the one we spotted before (and this wouldn’t be the largest we’d spot).

Have plans to visit Namibia too? See why you need to visit the desert scenes in the Sossusvlei

As The Sun Sets

After the elephant show, we drove up into a wooded area elevated above the river to find a baboon walking along the edge of the jeep tracks, before having to stop for a dung beetle crossing the road- slowly rolling his prized turd across the sandy tracks.

This all happening as a couple of mongooses frolicked in the bushes next to us.

Lioness On The Prowl

As we continued away from the river, the landscape became more barren with a sandy floor and scrubby green bushes. It was in this area that we encountered a pride of lioness that seemed to be hunting something with the way they were darting around.

Upon close inspection, they were chasing an impala, trying to capture it for dinner. Fortunately for the impala, they didn’t chase him down successfully. Unfortunately for me, it was getting too dark at this point and any of the photos I attempted to take were a blur from movement.

After watching the lionesses unsuccessful hunt we bashed down jeep tracks to bush camp in the wilds of Chobe National Park for the night. Upon arrival, we had to set up tents in what little light remained.

After a quick dinner, we sat in our ‘kitchen’ tent listening to the sounds of wild game prowl around in the bushes surrounding us. Eventually, rain surprisingly began pouring down, followed by a howling wind.

Before bed, I went to use the bush toilet (which is fancy for outdoor shitters in my experience), the bush toilet is basically a chair with a toilet seat, plopped atop a hole in the ground with a little tent over it. Well, while I was inside a gust of wind lifted the entire tent and brought it back down several yards away from me as I sat there on the now exposed toilet chair in the rain, feet in the air as scorpions were clamoring around the base (yes, this really did happen… and no, the scorpions weren’t as scary as they sound, especially after I learned earlier in the evening that these particular ones couldn’t kill you). I surprisingly slept fine after my adrenaline-pumped, scorpion infused before bed pee and despite the howling storm outside all night.

Have Cape Town on your southern Africa itinerary too? Check out my 3 day Cape Town itinerary

It was an early start the next day to take another Chobe National Park safari before waving goodbye to Botswana and heading on to Vicotria Falls across the border in Zimbabwe. The first sighting of the day was a massive waterbuck stood there, staring right at us, before turning and showing the white ring that circles their backside perfectly. Another short distance away we found warthogs just off the trail, knelt down rooting something out of the ground.

Drying In The Morning Light

I forgot to mention before that we awoke to a perfectly clear sky, but the next wildlife encounter we had was an odd one- a heap of vultures up in a tree with their wings extended out. Our safari driver explained that since it had rained the night before, the vultures had to air their wings out to dry before they could fly off elsewhere for the day.

Lioness Under A Botswanan Sun

Rounding a bend past the vultures we ran into a kudu, a lone stork, and a jackal before finding a pride of lioness lazing about in the morning sun.

Further on we ran across a young impala who had recently become a mother with her brand new baby. Luckily for them, the lions were quite away behind us at that point.

Just before reaching the Chobe National Park gate we got the grandest finale of all- massive herd of elephants. I think we lost count at about 60 elephants all marching in a line straight toward us. We stopped the truck in the middle of the tracks and waited for the parade to cross. Some of the elephants came right up to the side of the truck, so close you could have reached out and touched them (which is a most excellent experience, albeit a slightly terrifying one).

All in all, Chobe was a true highlight of my overland trip across southern and eastern Africa.

Planning to further explore the KAZA region? Make sure to add Victoria Falls and the Devil’s Pool to your itinerary

How To Get To Chobe National Park

The town of Kasane is the main gateway to Chobe National Park, located only 6 km from the park entrance. You can easily reach Kasane in two ways, by flight and overland.

Getting to Kasane is quite easy as there are regular flights from Victoria Falls, Zimbabwe; Livingston, Zambia; Johannesburg, South Africa; Maun, Botswana; Gaborone, Botswana; and Windhoek, Namibia.

Flights To The Savuti Marshlands and Linyanti Marshes

Most who visit Chobe National Park visit the Serondela area, staying near the Chobe River Waterfront between the Sedudu and Ngoma Bridge Gates.

You can easily reach Kasane by road as I did. Kasane and Chobe National Park are both located near the quad-border area where Botswana, Zimbabwe, Zambia, and the Caprivi Strip of Nambia all come together. Additionally, Kasane is a full-day drive from the town of Maun, the gateway to the Okavango Delta, making it easy to combine these two wonders of Botswana.

Whether you self-drive through Chobe or you hop on a safari truck as I did is entirely up to you. Self-driving is a bit more work, but the freedom can be a reward for many travelers. If you don’t have much experience driving on dirt roads and sandy tracks, I’d definitely recommend that you go on a Chobe safari tour.

For more info on guided safaris in the park, head to the Chobe National Park website. You book this 3 day Chobe camping safari, as well as the Chobe River safari cruise.

There are self-catering campsites within Chobe National Park, an eco-lodge, game and safari lodges, a glamping camp, and even a mobile camp that moves sites twice per week.

The lodges and glamping options come in at $500 USD+ per night for foreigners. You can read up more and see prices on the Chobe National Park website.

There are an array of accommodation options in Kasane to bit most every budget.

Have Any Questions About Visiting Chobe National Park? 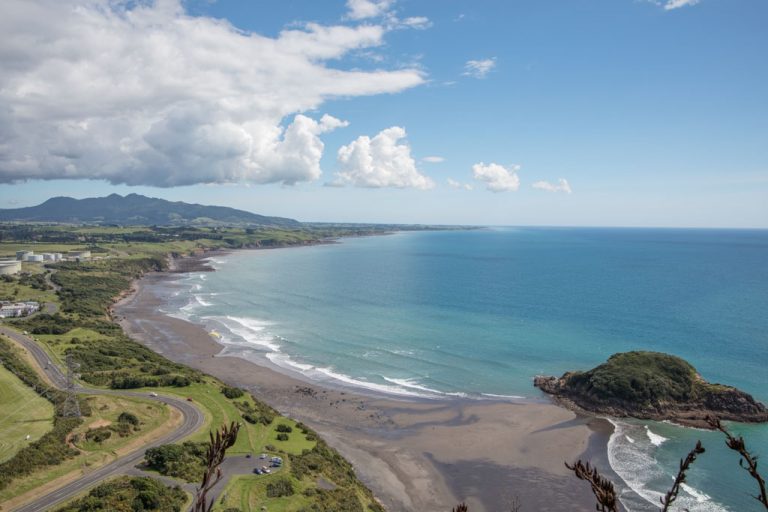 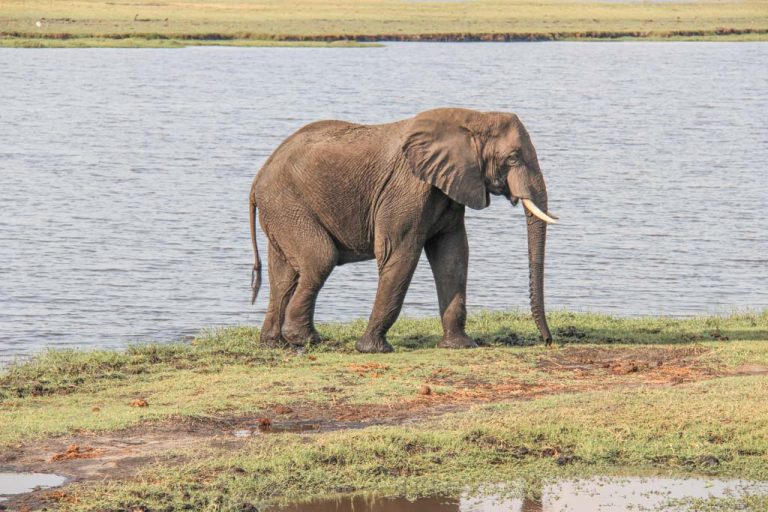