On my most recent trip I visited Armenia, but after meeting another traveler on the shared taxi down from Tbilisi to Yerevan I set out to travel Nagorno-Karabakh with him and two Armenian sisters. The best part is, none of this was my idea!

*Most countries do advise against travel to Nagorno-Karabakh (Republic of Artsakh) as there are no embassies or consulates to help you if something happens to you. There are occasional skirmishes with Azeri forces as the region is still recognized as a part of Azerbaijan.

UPDATE 2020: Starting in October fighting has erupted between Artsakh and Azeri forces. The Artsakh (Nagorno-Karabakh) region should be avoided at this time.

When the Soviet Union dissolved in the early 1990s the ensuing fight escalated in the mountainous area of Nagorno-Karabakh between Armenian and Azeri forces. A cease-fire was reached in 1994 after many lives lost, the displacement of many people: almost all Azerbaijanis that had been in the area were expelled to Azerbaijan and almost as many ethnically Armenian fled the fighting into Armenia.

When both Armenia and Azerbaijan gained independence from the USSR the fighting that began in 1988 broke out into full-scale war. In the end, Nagorno-Karabakh remained a region of Azerbaijan in the eyes of the world, however with a government all its own, a majority Armenian population, and the only access point being that of with Armenia.

In early 2017 Nagorno-Karabakh underwent a referendum, part of that referendum included a name change to the Republic of Artsakh, although the former name is most commonly used.

Start planning your road trip: Grab a copy of the Bradt Armenia guidebook, which includes Nagorno-Karabakh

Go pick up your ride, grab a little food before heading out of Yerevan, and get going early. Make your way to Tatev, first, of course, making scenic stops along the way. I

f you’ll be spending the night in Yerevan (you probably will) before setting off on your 3 day Nagorno- Karabakh adventure, I recommend Hostel Vagary for backpackers or shop other Yerevan accommodations here.

Unfortunately, when we arrived in Tatev it was socked in thick cloud cover. There is a cable car called Wings of Tatev that runs from Halidzor to Tatev Monastery. Costs are 4,000 AMD rt/3000 AMD one-way, an additional 2,000 AMD for an audio guide.

You’ll likely arrive in Goris in the late afternoon or early evening. We messed around so much that we didn’t arrive until about 8 pm.

We had a tent and climbed up to the caves above the Goris Cemetery and camped up there, in a tent, inside a cave, on Friday the 13th, in October… I can’t make this stuff up guys.

If camping isn’t your thang, check out Goris accommodations here. You could opt to stay in nearby Tatev, or Halidzor.

Get up and going at sunrise, especially if you opted to camp above the Old Goris Cemetery, you’ll have amazing morning views of the sun rising over the jagged rocks all around.

The bridge connects the two sides of the village on either side of the gorge. Once across to the other side, there are plenty of trails to explore and even a monastery.

Crossing The “Border” Into The Republic of Artsakh

Once back on the main highway connecting Goris to Stepanakert you will eventually cross the border at Berdzor. There is a building at the border, you’ll hand over passports and get registered here. Theoretically, you can get a visa issued at Berdzor, but the Armenian girls we were with said they’d never crossed with foreigners that have gotten it at the border, and we were told by the border guards to continue to Stepanakert for it.

You can also get a visa in Yerevan, but you will still need to register in Stepanakert at the Ministry of Foreign Affairs (thus making it pointless to get one in advance, because you have to go there to get a visa anyways).

After crossing into Nagorno-Karabakh head toward Shusha and turn right off the road and follow it (best using Maps.me) to a trailhead. This trail will take you into Hunot Canyon to the beautiful Zontik Waterfall.

I wasn’t too enthused about visiting a waterfall, but Zontik has got to be the most beautiful fairytale of a waterfall I’ve ever seen. This is a short trek, only about 20 minutes each way. There are a few long hikes that can be done in this area.

Stepanakert is a nice small city with a few restaurants and is easily walkable, albeit not offering a lot in the way to do. There are a scattering of restaurants in the downtown area and a large grocery shop.

In the past, you used to have to go to Stepanakert to pick up your visa from the ministry of foreign affairs. This no longer the case as you will be issued a visa, free of charge on the border between Armenia and Nagorno Karabakh. I have left the MFA address and phone number below in the event that the rules change back to the old way (not unheard of in this part of the world), or if for some reason you may need it.

Republic of Artsakh Ministry of Foreign Affairs is located at 28 Azatamartikneri Street, Stepanakert (near the Stepanakert bus station). The phone number is +374 47941418. Open 7 days a week 12 pm to 3 pm, however, I arrived at 4 pm on a Saturday and was told to return at 6 pm.

Looking to spend a day or a few in Stepanakert? Check out Stepanakert accommodations here.

As we waited for the MFA to re-open we decided to make a visit to Tatik-Papik, the one attraction I knew of inside of Nagorno-Karabakh prior to visiting. Tatik-Papik means Grandma & Grandpa in Armenian. This monument is also known as ‘We Are The Mountains’. It’s a must-visit for anyone heading to Stepanakert on a Nagorno-Karabakh road trip.

Our end goal was to camp under the stars at Sarsang Reservoir this night. However, we got a later start than we had anticipated having to wait to acquire visas, so we didn’t get there until long after dark. There are several scenic stops to make along the way to Sarsang Reservoir.

Sarsang Reservoir is a great place to camp. Just pick a dirt road off the main highway and explore until you find a good spot (we camped here, via Maps.me).

Note that where we camped there are wild marijuana plants all around. Yes, we used them as a fire starter… Again, I can’t make this shit up.

Oh yeah… and the stargazing is unreal out here.

Not looking to camp at Sarsang Reservoir? The city of Martakert is less than 30 kilometers away, Shop Martakert accommodations here.

Watch the sunrise over the reservoir hopefully with a nice morning mist rising off the lake. Get on the road early and head toward Karvachar.

Karvachar is a village with a nearby geyser (about 8 kilometers away). On our way to the geyser, we were flagged down by a group of men at a little picnic shelter next to a hot spring pool.

We were invited for a big Armenian feast of a lunch, that was heavy on the Araki (liquor). With grilled vegetables, shashlik, smoked fish, lavash and more being passed around. After the Araki-fueled lunch, it was time for a quick swim in the hot spring pool, and off we went!

Get ready for a real Nagorno-Karabakh road trip adventure through the mountains! This route is going to take you up and over high mountain passes and back into Armenia.

We had a small two-wheel-drive SUV and made it, but a good ol’ Russian Lada or 4WD would make it a little easier. You’ll constantly be stopping along the way for all the photo opportunities.

Note: There is no actual border crossing in the mountains here that we came across.

Now back into Armenia and out of the mountains make sure to visit Lake Sevan. We did manage to pay a visit to Hayravank and Sevanavank Monasteries. Lake Sevan is one of the largest freshwater alpine lakes in all of Eurasia. There are several beaches around the lake, good for a swim in the summer.

A beautiful church on the shores of Lake Sevan surrounded by Khachkars, which are Armenian Cross-stones.

A beautiful monastery located on a narrow peninsula on the northwest shore of Lake Sevan. This peninsula used to be an island, but during the Stalin-era the lake was artificially drained, leading the water level to drop by 20 meters, turning the small island into a peninsula.

Now go out and celebrate now that you’re back in Yerevan, your Nagorno-Karabakh road trip is complete. I stayed at Hostel Vagary and can’t recommend it enough! The hostel is super clean and the staff is great. Shop all Yerevan accommodations here.

Got Questions About This 3 Day Nagorno-Karabakh Road Trip?

Ask in the comments below. 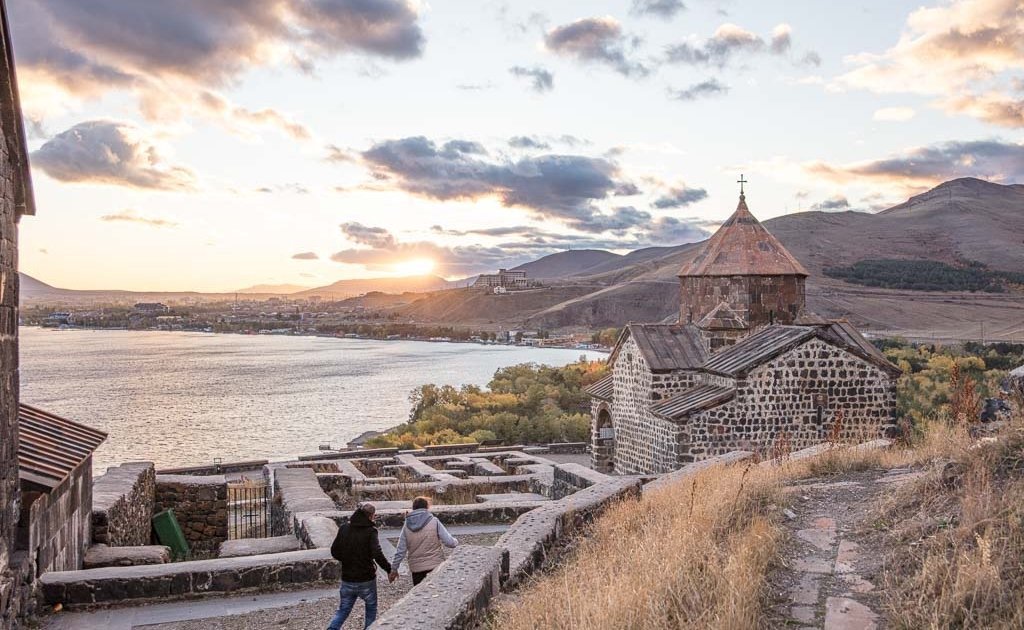